In the 1950's there were hundreds of ballpoint pen models on the market, but every one of them used a different refill. It was in 1953 when Paul Fisher introduced the Universal ballpoint refill which could be used in most ballpoint pens.

In his efforts to make even better refills Paul invented the Space Pen also know as the 'Zero Gravity Pen'. The cartridge of the pen was pressurized with nitrogen so that it didn't rely on gravity to make it work. It is able to write upside down, underwater, over wet and greasy paper, at any angle, and in extreme temperature ranges. The Fischer cartridges were also very useful by astronauts to write in outer space, where there is no gravity. 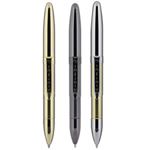